I'm discovering for the first time The LongSwims Database, from the Marathon Swimmers Federation (MSF) website and here it is the true challenge gets a name.

Lago D’Orta
27 kilometers between "Lido di Gozzano" and "Omegna", circumnavigation, going left and turning right. A lake, as big as a sea, at the base of the Alps.

The Event, organized locally by https://www.triton-events.com/ from 2016, it reaches its 3rd edition in 2018 and it is worth mentioning that the support teams include motor boats and medical staff for first aid - which I found very often on the route. The event does not lack anything, but the most valuable asset is the warmth of the people, from the President, volunteers and participants. The president of the Association is Stefano Falciola, a gentleman whom I wish every year Happy Birthday, on the same day as me. 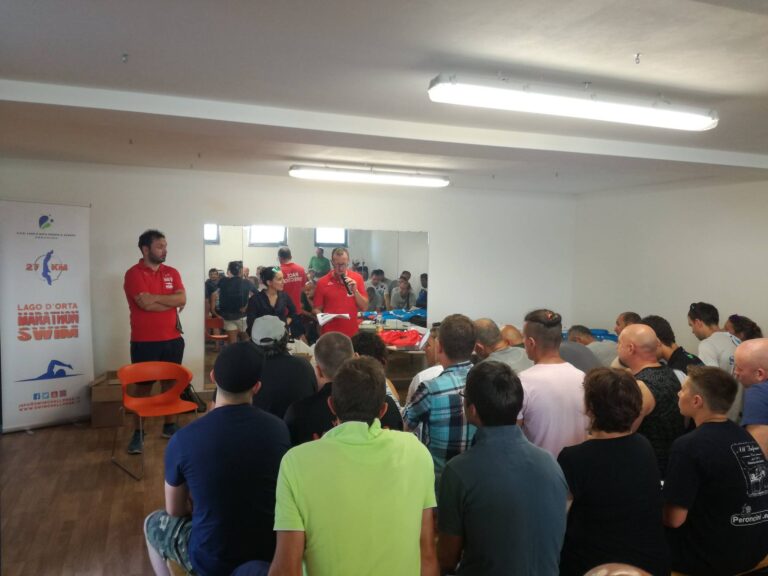 Great, let's start training! And we train from winter until next summer, with a few long outings in Lake Buftea - where I managed for the first time, at that moment, to swim in a training 18 kilometers. Be that as it may, I haven't had any "long-distance" ultra-marathon, non-event training, so long. During the Lago D’Orta event, although the organizer can make it available to me, I choose that I will need a friend, experienced kayaker who can endure 27 kilometers in a kayak for 8-9-10 hours ... as long as it takes.
Pic and Poc. (old Romanian cartoon of two funny friens)
You know the say A friend in need is a friend indeed, and the friend who jumped in to help me was Fitz. 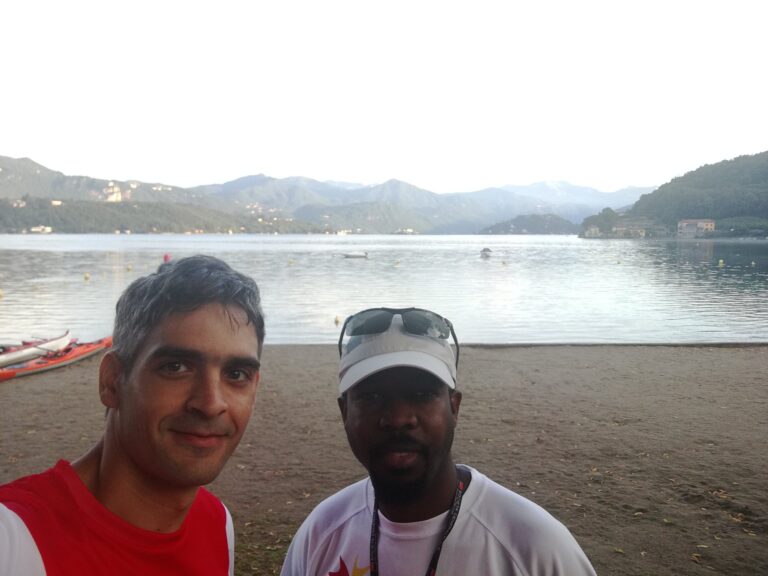 It could be said of us that we are Pic and Poc:
- I set out to swim 27 kilometers, without neoprene, in a mountain lake (on a summer day) without having previously swum more than 5 kilometers without neoprene, and in my rescue - in case I'm drowning, there will be my friend Fitz
- he, who at that time did not know how to swim or kayak; but he has an iron will and carries a friendship, which I will always respect.
Like my mom said "I don't know who is crazier than the other, you rely on someone watching you who can't swim, and in his eventual rescue - it could be you, who will hardly be able to swim alone after so many kilometers” (= 2 crazy).
But we train like professionals, and just like I train a few times a week, Fitz goes to the gym, pulls the rower and takes kayaking lessons - and he asks me if he's going to have a sea kayak or not. (a ?! 🙂) I didn't know what to say, but in the end it was a sea kayak. (Grazie Stefano!)
Landing in Italy
Laura, I and the children arrive a few days before, visit the surroundings and do as I like to do, when I can, a tour to recognize the route.
I know that while swimming, if I am not overwhelmed by a negative thought such as "I have not reached the first curve"; knowing the route is an essential thing in the management of thoughts and effort.
Fitz is due to fly out of London the night before swimming - with a "slight" delay and landing at around 1 AM.
So the sleep starts at 2 AM and ends after 3 hours .. for swim start prep, around 5 AM.
Good plan 🙂 The night before the swim there was a fantastic storm, so strong that on the road between the airport and the accommodation I had to stop several times due to the lack of visibility on the road. The storm threatens our swimming route. Stefano has at least 3 plans: main, back-up and back-up to back-up. or postponing the start by one day. How ugly the weather was the night before; it was so suitable during swimming - the sun in the clouds, which shined when needed. 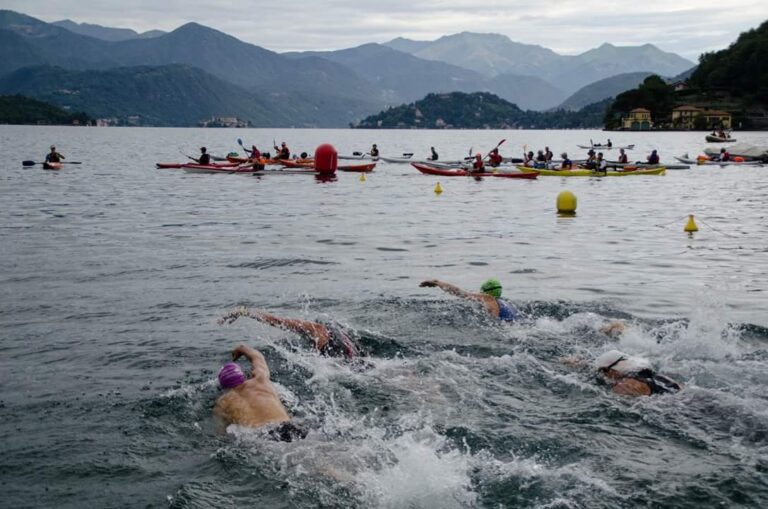 Start!
It starts for all participants: unassisted swimming, neoprene swimming, relays / team and the fun begins.
I'll be with Fitz right away.
Without too much strategy, the strategy is: I can see my swimming, at my own pace. After a few curves, shores, bays, trees - trees - forests and almost 14 kilometers, we reach Omegna.
I'm a bit broken :), with a lot of muscle pain, but with the right thoughts.
As we established from the beginning, Fitz keeps the kayak permanently next to me, according to the rule: the swimmer gives the speed, while the kayaker gives the direction.
At least 1/4 of the time I spend in the water I talk to myself; I give my speeches, in Romanian and English, in thanks to the one (Fitz) who accompanied me in the kayak in a special way, and to those who were with me during the preparation.
I think that the monologue and the gratitude helped me to overcome many of the obstacles and ... there were many. 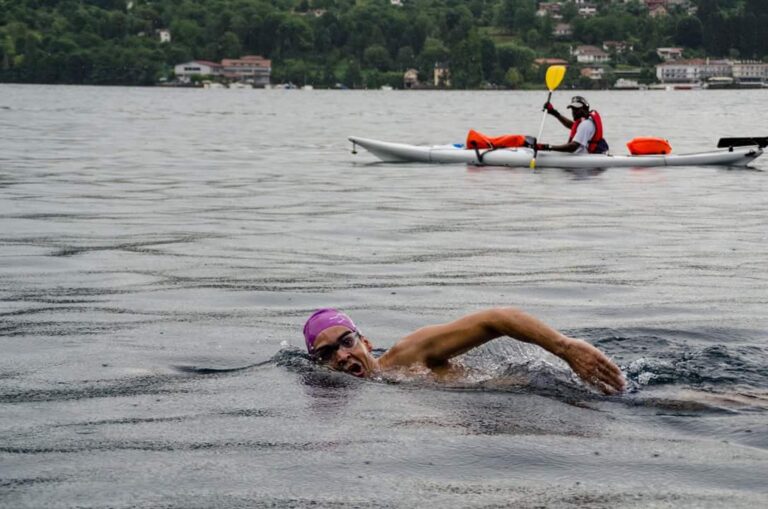 Somewhere in the middle of the way back, after about 20 kilometers - we meet passenger ships (we can think of boats like buses on water) and near the island of San Giulio, there is a large bay on the left near where there are a lot of waves and currents like I haven't seen before that swim; we practically move everywhere.

I grit my teeth, close myself even more in my thoughts, and follow the direction chosen by Fitz.

After crossing the island I will take only 4 important lessons:

- the point of arrival, although visible, is not as close as it seems. The better it is signaled, the further away it is when I see it. Specifically, here - what do you think? it is about 3 kilometers away; and from this distance, about an hour - it's a bit too early to get excited, like I did.

- We move on to lesson 2, which I still can't master properly - if the end is near, I don't have to start refusing food
The nutrition plan is made, when you have a clear mind, to stick to it - not to adjust it when your brain is jammed, after the effort. Those who were with me on later swims will recognize this behavior, of mine (ex the adventure on the Danube, from 2021)

As we approached the finish line, I had the following thought about the ranking: I'm clearly not the first, but I'm certainly not the last. If I were 3rd now and I was overtaken, I would finish in 4th place - worth it anyway, but isn't it a shame for the effort made?

With our separate marathon swimming results, we keep an eye on the skins/ non-neoprene swimmers in front and behind.

Of course, I begin to see an athlete behind me (without neoprene).

And the race to the finish begins. I could not understand how this athlete appeared and where he got these fantastic reserves, to recover more than 300m in 3 kilometers (after all 27). 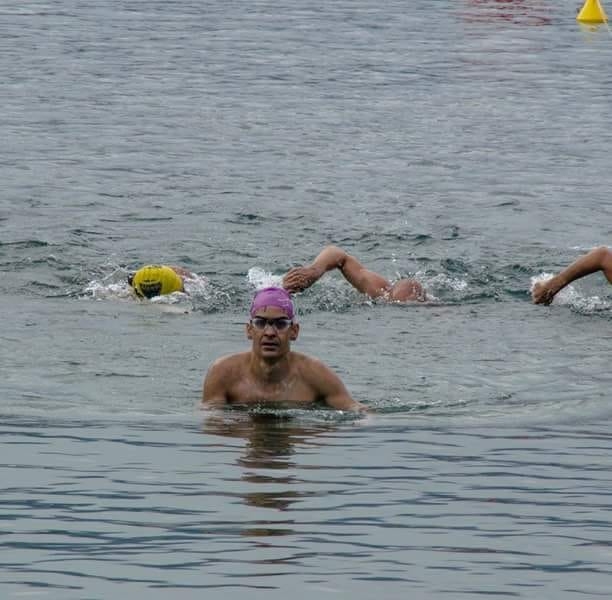 Near the shore, at the finish, I was "leading" him by about 20 meters, and in the last moments 3 more people enter the water, in the company of the athlete.
Then I realized what I had suffered: I competed with a more rested swimmer, from the relay!
It's funny I came out well, I stayed in front and I survived.

- And the last lesson is about the food at the end: I would eat stones too.
A lesson learned, which I managed to control in the following years better and better.

This was the "race", Fitz and I were at the top!
I placed 3rd, in the age category, in my first swimming in the discipline of (ultra) marathon swimming. 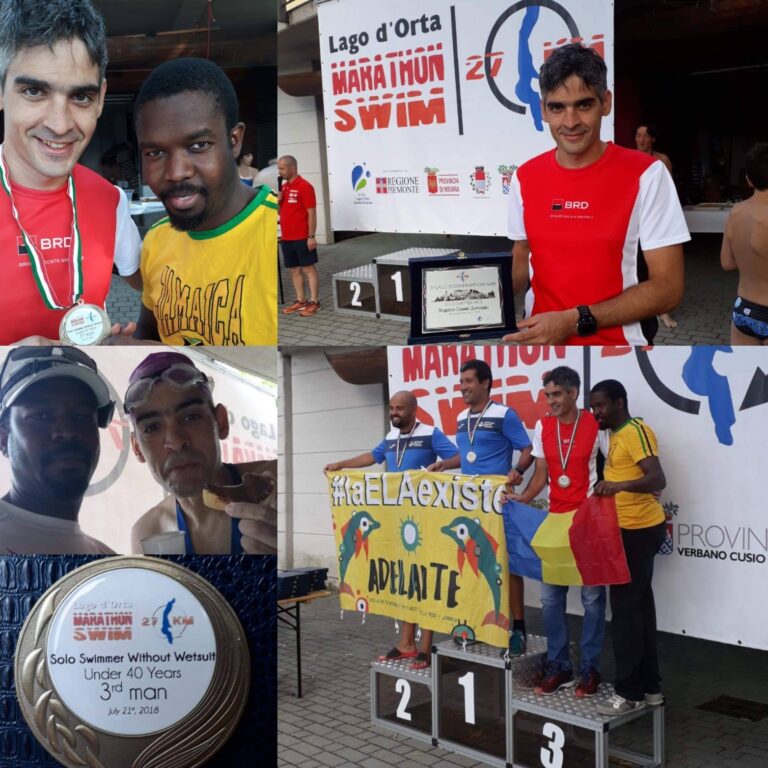