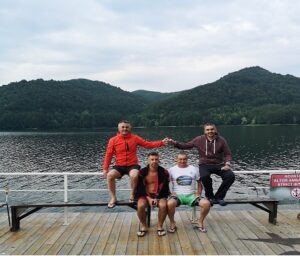 It took me a while to lay out a few lines about the story of the round trip of Lake Vidraru.
Last year, in 2019, Bogdan Zurbagiu, about whom I didn't know much, attracted me to a special world, that of swimming in open waters. An incredible, unique world.
I can say about Bogdan Zurbagiu, who in the meantime became one of my best friends, that he was also my first model in this discipline, although he is much younger than me! I swam with him in Lacul Beliș (14 km). It was my first experience of this kind, an experience that represented the spark that ignited the flame of passion for swimming in open water.
The beginning of 2020 found me in a sports form that entitled me to set a series of goals, related to swimming in open water, quite bold. Among them is the crossing of Lake Vidraru, a lake of incredible beauty. Everything was scheduled for July 18, 2020, a date that has not changed despite the fact that our lives have changed radically with the advent of the already famous coronavirus…
But there were a few months that were a challenge for everyone, if we want to describe the situation in optimistic terms. During the restrictions I did not do any specific training, but only exercises that helped me maintain a pretty good physical shape.
Starting with the end of May, after leaving the quarantine period, we looked for a series of locations to perform swimming training. The fact that the pools remained closed, the only alternative at hand for training remained the lakes around Bucharest.
That's how we got to Lake Buftea, a welcoming lake for lovers of open water swimming. 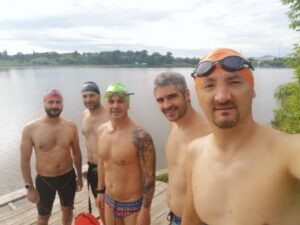 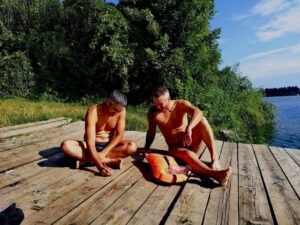 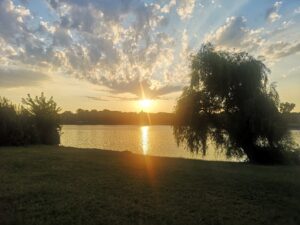 With the help of Facebook (look, Facebook also does good things!) We managed to gather in an organized group of swimming lovers and every weekend we tried to regain our freedom of movement, enjoying that some children of the facilities offered by this lake. So, next to Bogdan, Silviu, Andrei, Matei, Cornel, Leo, Andrei-Nicolae, Cameliu and Sergiu (the latter usually appeared after we all left!) I gave birth to the “Buftea Group”, as I like to call it.

The thought that often troubled me was related to the limited time pressure I had until I crossed Lake Vidraru. I often wondered if I was ready for such a race. To my surprise, I regained my strength in a very short time. But I neglected an equally important detail, namely, the logistics part. So, as usual, a few days before the event I started to give a shit in the country and look for people to help me achieve my goal. I didn't stop to think and I turned to my good friend, Sorin Rudeanu, the man who was going to be my kayaker and observer in the race. A kind of "orchestra man." On the last hundred meters I supplied myself with the necessary things from Decathlon, where all the Romanian lovers of cheap or more expensive movement go! Later, thanks to the booking, I managed, also in the last moment, to make a reservation at a pension in the Vidraru Dam area.
Sorin and I agreed to leave the day before the race, with the idea of ​​arriving in the area as soon as possible, for a tour to recognize the route and, if we had time left, to enjoy the beauties of Transfăgărășan.
Said and done. Early in the morning, after checking our luggage again, to make sure we didn't forget something, we set off. I made the first stop at Vidraru Dam. Once there and seeing the greatness of the place, the first thought that crossed my mind was: “What the hell am I looking for here ?! Why did I have to go after Bogdan Zurbagiu ?! ”. I have a bulletin over his age. How will I fight with this immensity of water ?! ”. 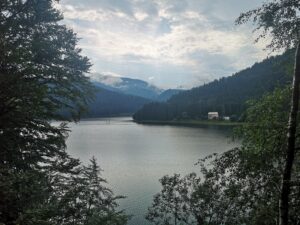 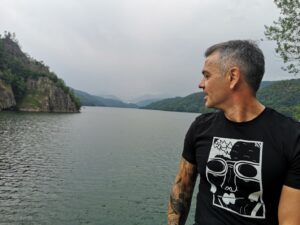 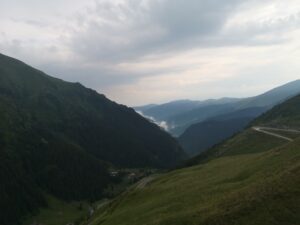 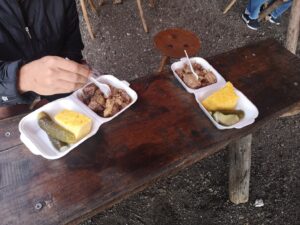 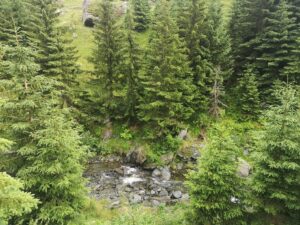 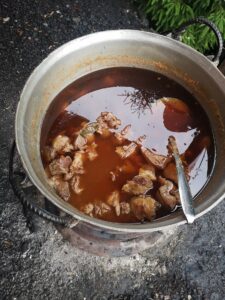 After a short photo session and some jokes made by Sorin about me, I remembered the virtual commitment I make on Facebook before each race, my way of motivating myself in such situations, a kind of taboo acquired in recent years. So I told myself it was time to get to work, to complete this challenge.
We decided that the start of the race would be somewhere around 9.00 in the morning, fixing the start near the dam. The entire route to be covered was, by our measurements, about 10.3 kilometers. But, as not all of them come out as usual, there were some problems related to the logistics part. We had kayaks, but we didn't have pumps to inflate them and we also hadn't established the teams that were going to accompany us. Chaos! As with any debut!
At the time we should have left for the race, me, Bogdan, Silviu (on his first participation in a swimming race of over 10 kilometers) and the other boys who were to accompany us on the route were at breakfast. It was at the same time the moment when Bogdan proposed to cross Lake Vidraru round trip, a total of 22 kilometers, a challenge to which he knew that I could not answer other than positively! This great slick Bogdan! To achieve this goal in maximum safety, we decided to swim in tandem and have a single support team, consisting of Cameliu Costache and Sorin Rudeanu. Marathon Swimmers Federation, we chose the shortest distance. We also set out to swim at a speed of 3 kilometers per hour and to take hydration breaks at intervals of 25-30 minutes. 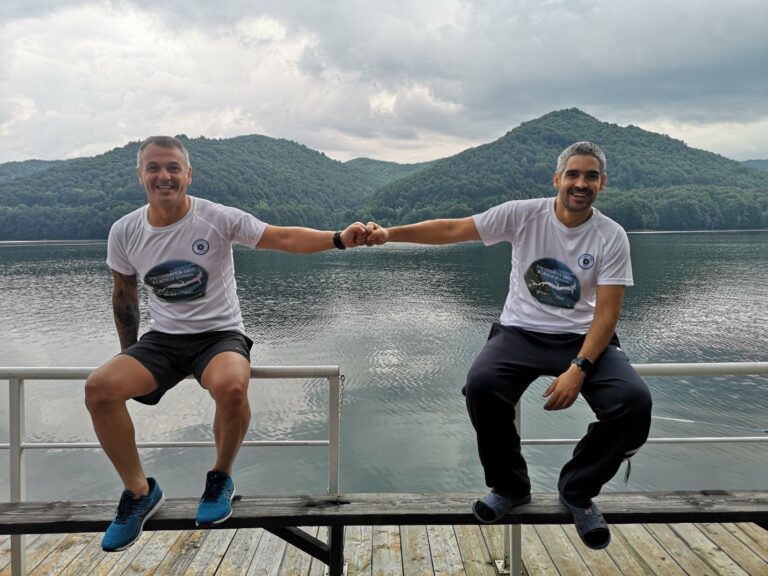 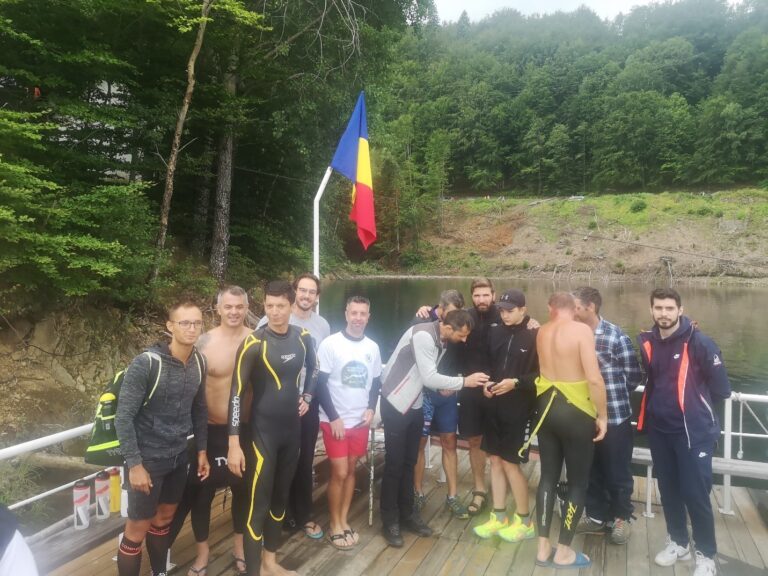 I didn't know much about the lake, I just read it online. I would like to give you a piece of advice: Avoid believing the legends of the lake you are about to cross! Legends are legends and that's it!
I was rather curious to read about the creatures of the lake, 4-meter lizards, real monsters, and about divers who refused to sink because of the debauchery discovered in the depths. You realize that before I left for the race, all sorts of images, worthy of SF movies, were running through my head. Fortunately, the monsters have remained only a legend!
With a delay of about two hours from the set time, we set off with the hope that we would have a quiet and predictable race.
The water temperature at departure was 21 ° C and the outside 18 ° C. The wind was blowing at about 20 kilometers per hour, which made it very difficult to advance the kayak. After this experience, I do not recommend the use of inflatable kayaks when the wind is strong, unless you are hungry for strong sensations! I say this because I had swum about 500 meters and the kayak that accompanied us had not managed to leave the area where we started. It was actually spinning in place. I panicked a little, because without the kayak next to us we would not have been able to finish the race.
It was the moment when the “orchestra man”, Sorin Rudeanu, came into his role, who managed to tame the naughty kayak!
The first 6 kilometers of the race, even if I had wind, were as I wanted them, with smooth waters. I hadn't started to feel tired yet.
Everything went according to plan. But, as I have to pull hard for every thing I want, it suddenly started to rain lightly and the wind blew. Thus, over a distance of about 2 kilometers, I had to put my arms to work and make an extra effort, which left its mark on the last kilometers of the first part of the race. The water temperature had begun to drop to 18 ° C.
At the end of the tour, about 11 kilometers, we followed the MSF rules, coming out of the water at the tail of the lake, enjoying a well-deserved break of 10 minutes. If on the route of the almost 11 km swum, during the hydration breaks, I consumed only Powerbar hydro gels, on land I felt the need for solid food, respectively a Powerbar protein bar, taken from the "joben" of the same "orchestra man".

The "second round", the return to the starting point, the dam, that is, took place in fairly good conditions.
In the economy of the race there were, I must admit, two very important moments, moments that later represented the link between us, that team spirit that many talk about, but few understand its meaning. I was watching Bogdan Zurbagiu swimming next to me. The water temperature was constantly falling, and I felt the need for more frequent breaks. I confess that I was worried about Bogdan because, not wearing a neoprene suit, he risked hypothermia. I even felt responsible for the risk to which Bogdan was exposed, who had adapted his rhythm to mine.
The second moment came, so to speak, naturally, at the end of the race, when I discovered how many people care about me, about us. From the encouragement before the race, to the one during the adventure, but especially from the end of it, they all represented a real fuel, without which I would not have succeeded. Simple words at first sight, such as family, friends, get really cosmic connotations! You really realize that you are not alone in this world, in this increasingly strange universe.
There, on Lake Vidraru, I experienced unique emotions, an energy I had no idea about, an energy transmitted through those close to Prometheus himself, the son of Iapetus and Clymena, who stole fire from the gods to give to the people, and whose human appearance is the symbol of Lake Vidraru! 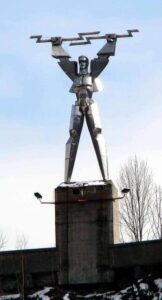