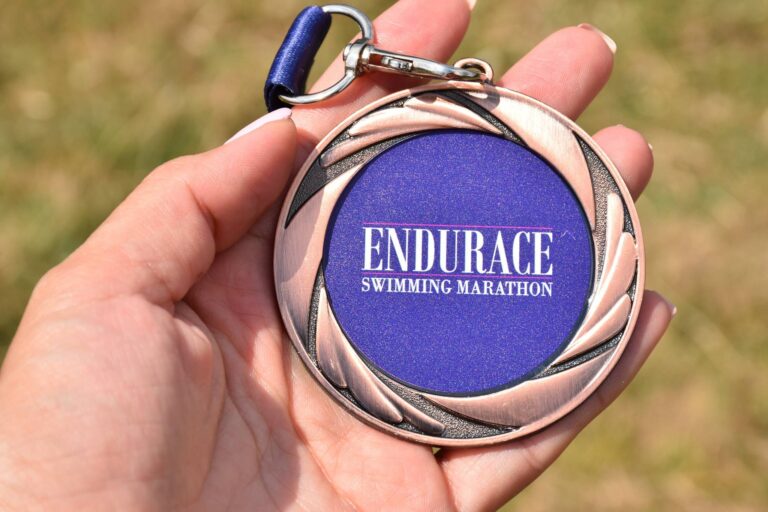 "Beginnings" BELIS Lake, 10K, post-Hamsia Cup 5k.
After a start even earlier in the year at the "Hamsia Cup", in a swimming in the sea (with neoprene) between Vama Veche and 2 Mai, on a distance of 5 km. In the year of the event, 2017, we found out about the existence of an event of 10,000 meters, swimming called "Endurance"In open water, in Cluj, organized on a Sunday, in a lake I had never heard of, by a sports club association Orca (which I had heard 🙂 by the way I had already enjoyed the good organization of a 1500m event in the pool in Cluj). The club in the same place, the day before, also organized a half ironman event, as if it had already become a tradition at that time.

I didn't feel fit for the triathlon event in those places, knowing that there was a big difference in level - cycling and running; more excruciating than I would have been willing to suffer at the time. But a 10k swimming in neoprene, sounded good and we advanced with the plans. I would always choose the same distance swimming vs. running. I showed up on the spot and I remember that at the beginning I noticed some swimmers in briefs, which I considered crazy with the right documents. The water seemed too cold in neoprene at the first contact. At that time I was part of the team of the Seven triathlon club and I enjoyed the company of my teammates Adriana Istrate, Alex Cristal or Liviu Irimia. We found Bogdan Nicule, at his home, my colleague of masters competitions - who at the first competition together took care to leave some distance between us. Plus the one I managed to convince to participate, an eternally recognizable friend, Sergiu Halauca. 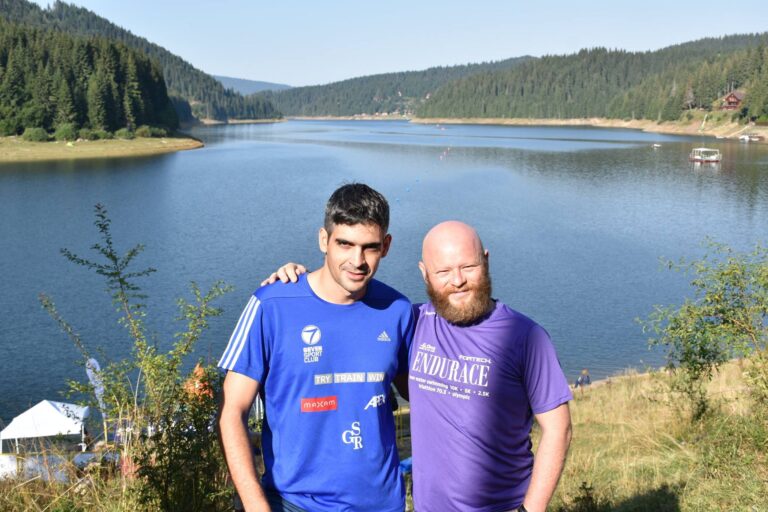 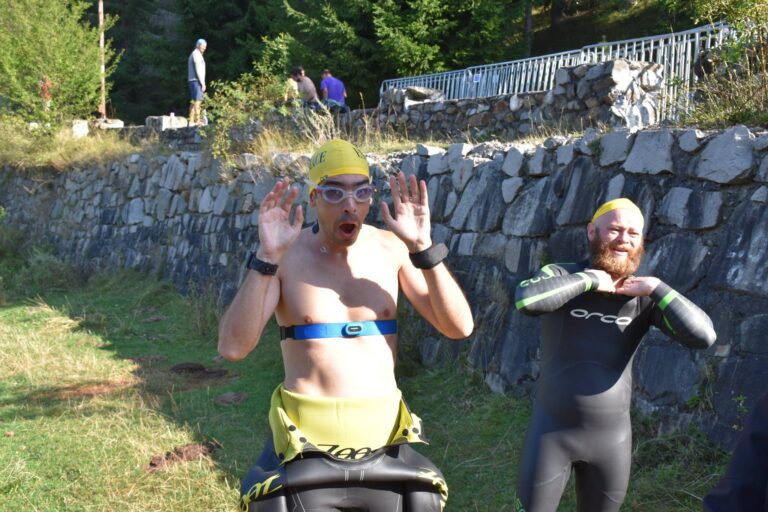 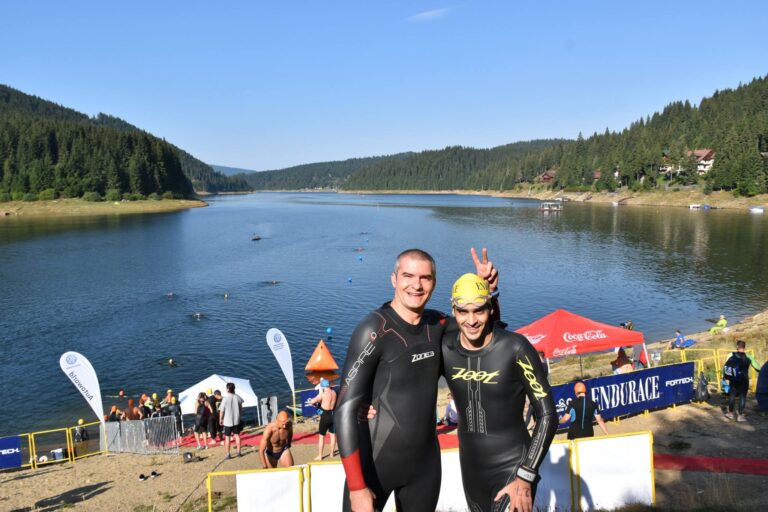 Simultaneously, the start was taken for 3 distances: 2.5 km, 5 km (as if) and 10 km.
In the case of the distance of 10 kilometers, the route involved 4 laps of 2.5 km each, a route marked with buoys. A straight, monotonous line, which each time seemed longer than the previous one. At the end of each lap you could stand up and eat some fruit / drink liquid on the shore - then continue on your way. Ok, I'm starting, I'm positioning myself in a group; we knew that the rules also allow going to the net (swimming was not according to the classic rules of marathon swimming) and we see each other on the way in a group of 5-6 people .. some in front, others in the middle in their net and so on. 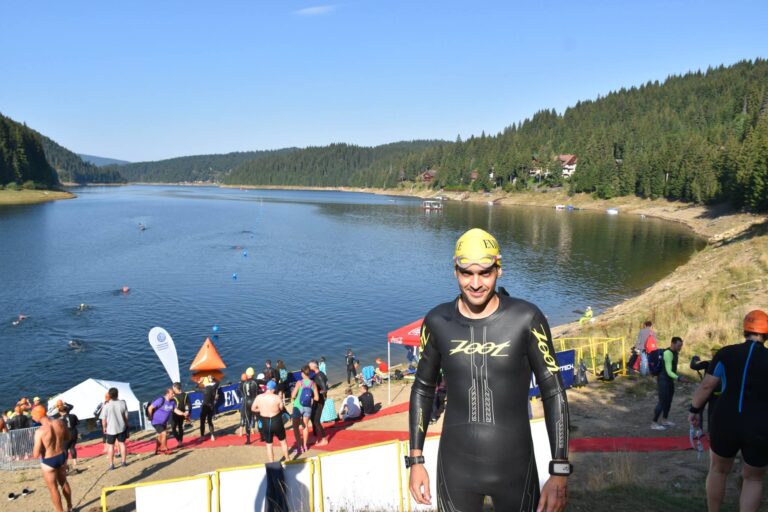 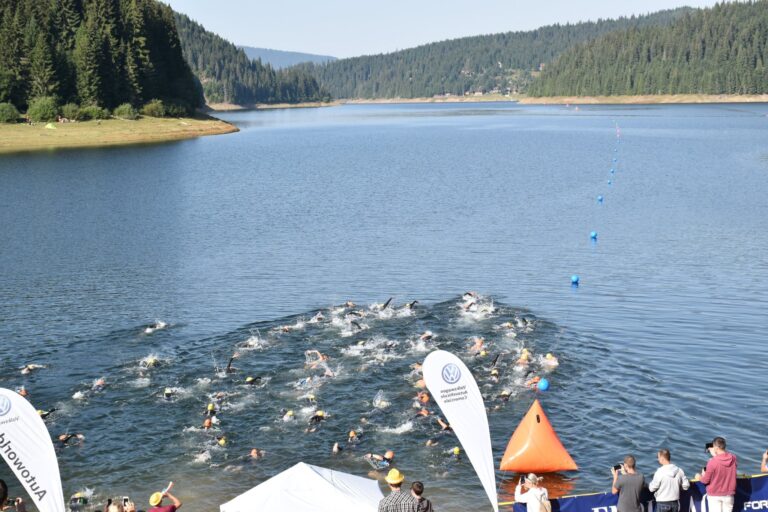 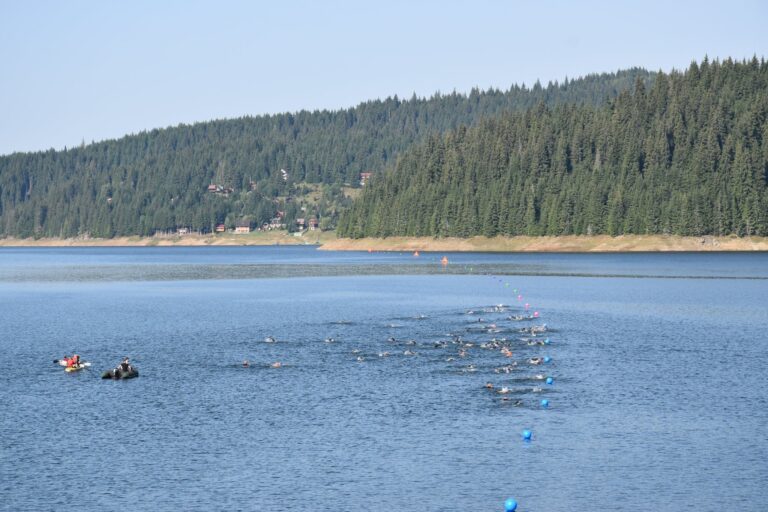 After the first round I already had 2 "favorite" athletes in front of me and at the end of the first round I receive the message from one of them "are we still in front ?!". We knew this leader, he was a good swimmer and a good coach, considering our subsequent collaboration. He was right, we enjoyed the net, but we also had to offer it - so we led the next round, our group of 3 people. And I swam at a determined pace, knowing that at the end of the lap we would spin. 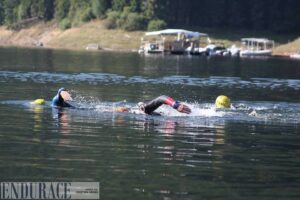 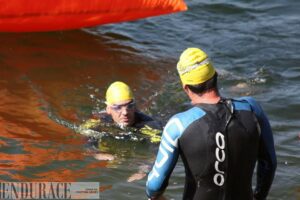 Eh! Surprise!! At the end of the second round I realized that our group will not be what it used to be, the boys participated in 5000 meters, and I was half way, with the remaining energy.
Bon, and I saw myself swimming, alone, concentrating on muscle cramps, methods of avoiding muscle cramps, sliding technique etc.
I still remember remarks like "take the sole out of the water less", "relax the arm at the entrance to the water", "kick with the other foot if it hurts") and all sorts of other similar thoughts - becoming a champion for a few hours at talking by myself. 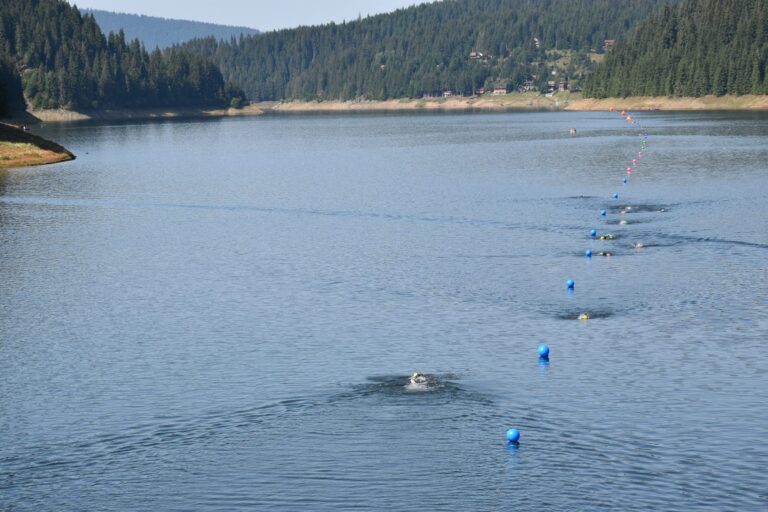 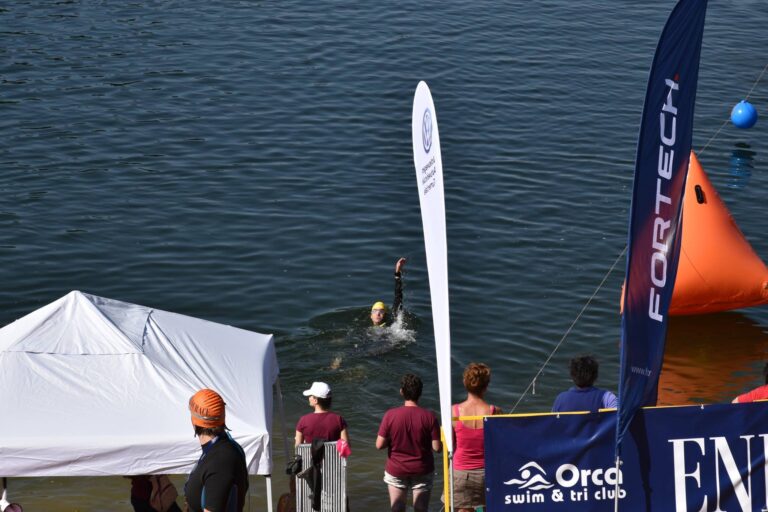 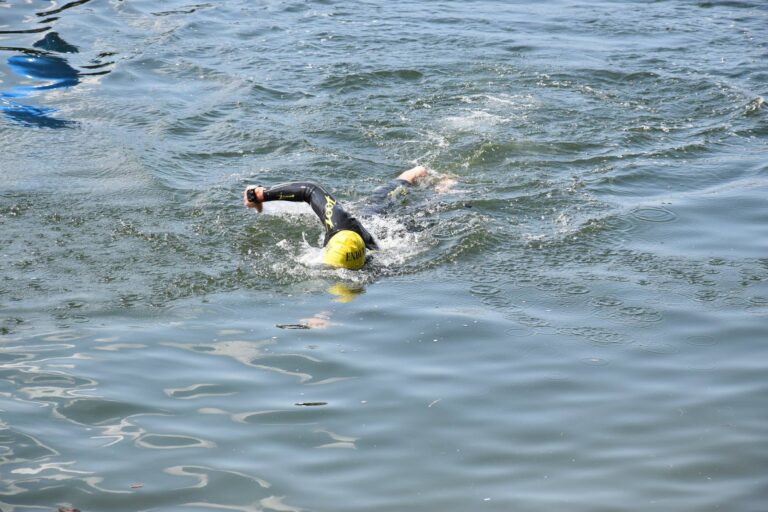 After the tour I stopped, ate some fruit, drank some water, greeted the audience, posed, turned on my back ... enjoying the atmosphere and finishing chewing, then to continue the journey. It doesn't sound very professional but the main goal is to reach the end, to reach the goal - enjoying the journey. I reached the end of the 4 laps, respectively 10 kilometers and when to stand up ... guess what? I couldn't stand up much and I needed help to get out of the water. 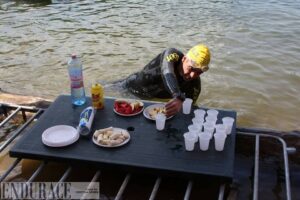 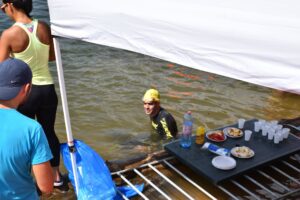 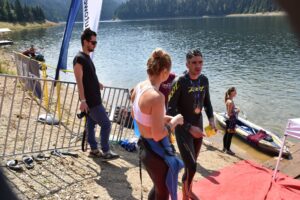 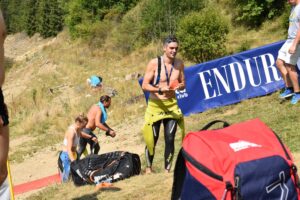 There is a theory in triathlon, which says that when you get out of the water you must have enough breath and blood on your feet to be able to go and start in a hurry, with small steps, to the transition point (where you change into cycling equipment). In order to be able to rely on your feet, it is necessary that near the shore, for the last tens of meters, you increase the frequency of hitting the water with your feet, moving the blood in their area a.i. to activate them. How are the peripheral areas / extremities of the body? In neoprene swimming it is less noticeable, but in swimming in cold water for a longer duration (including swimming in water of 27 degrees, after more than 24 hours, where every second there is a heat exchange between the body and the environment colder) the body reserves energy and conserves heat by contracting the blood vessels and keeping the circulation active, especially towards the central area of ​​the body. At the stronger kick, the blood will be pumped into the muscles, the veins will dilate and for a short time - warm blood from the center of the body "core" will reach the extremities - allowing the swimmer to resume the upright position. When swimming with neoprene, because the feet and the pelvis are kept on the surface of the neoprene, there is also an additional cause of having less blood standing, horizontally. From that moment I applied this principle, which I had forgotten about Belis 10k, in all subsequent swims and at no time did I encounter these difficulties. We return, at the end I found out that I came out 4th as if, out of a group of 23 men, I was proud of this achievement, to swim 10 kilometers, uninterrupted, without previous experience in a lake of great beauty. . I realized that I can do more, of course after many workouts and I set out to identify an event that would bring at least as great a challenge. 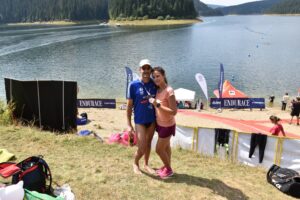 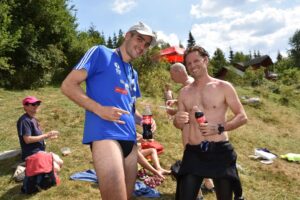 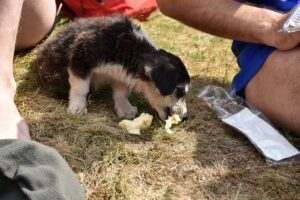 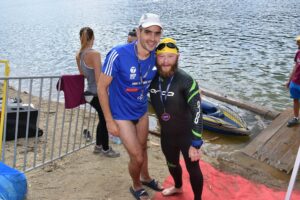 I was so impressed by the whole experience, the event being organized exemplary, that I decided to look for a future event at least as challenging. Later I signed up for the next year (2018) for a swim on a distance of 27 kilometers, without neoprene, in a mountainous lake, according to the rules of marathon swimming, in Lago D’Orta, Italia.
… Followed by months of training, (re-re-re) reading the rules of the event and marathon swimming, finding the "team" of assistance and its preparation
.. in a future story, we reach Lago D’Orta…
In 2019 I was coming back to write the story about inotul de 14 kilometri in Lacul Belis, then swimming according to the rules of marathon swimming and making the first documentation of this kind.