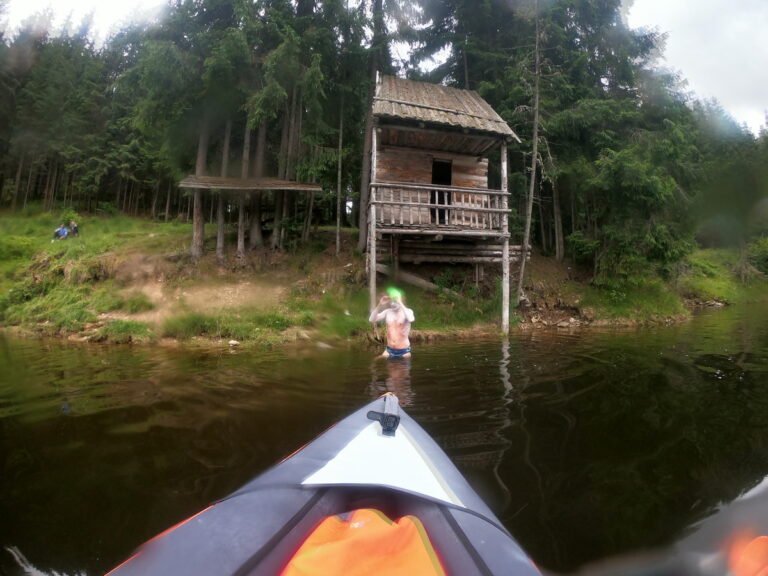 On July 13, 2019, we started in an event that aimed to swim, along the entire length, of Belis Fantanele Lake, respectively 14
kilometri. Lacul Belis Fantanele este un lac de acumulare, aflat in inima Transilvaniei, in judetul Cluj, pornind de la varsarea raului Somes si pana la
barajul Belis.
The swimming took place under the organization of a local sports association and considering the admiration I have for the rules of marathon swimming, I wanted to swim according to these rules.

I previously swam here in neoprene, in 2017, during a sports event, for 10 kilometers and then I discovered the beauty of the place. I also noticed the low temperature of the water, compared to the lakes around Bucharest, in the plain, with which I was used.
Given I was registered to swim across Lake Ijsselmeer in the Netherlands on August 17, 2019, swimming here would have been a very good last endurance workout, in similar conditions of low water temperature and an opportunity to perform my first swim, organized individually, documented according to the rules of Marathon Swimmers Federation.
The initial plan was to swim the lake back and forth, starting from the dam, to the tail and back; but the weather conditions were difficult that day, because compared to the historical averages and the previous week, the outside temperature had dropped by about 10 degrees and that of the water by 3 degrees. Thus, at the beginning of swimming, the air temperature was 10 degrees and the water temperature 18 degrees, compared to a week earlier at 20 degrees air and 21 degrees water.
At the same time, I had little experience in marathon swimming and the support team, although it had a big heart, did not actually have enough experience to be able to identify and manage a possible hypothermia. The support team throughout the period before and during the swimming team was with me and gave me a special attention.
For this swim I had to prepare myself physically and mentally for the weather conditions, expected, and I performed multiple workouts in cold water conditions and took many cold showers. 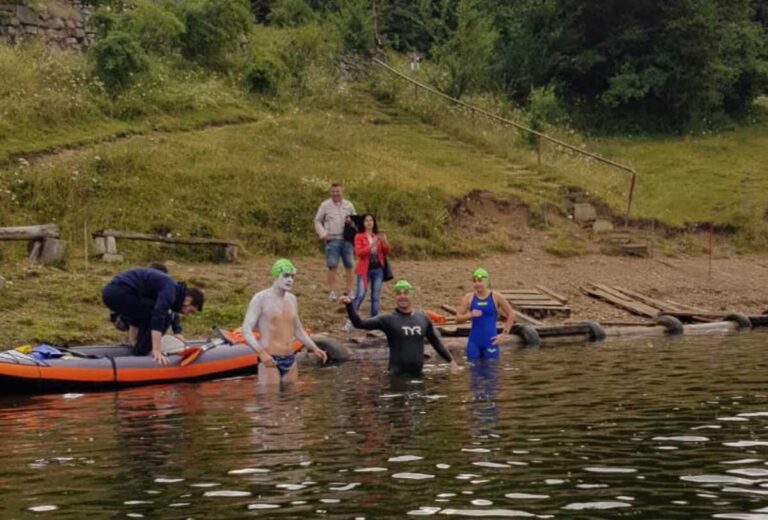 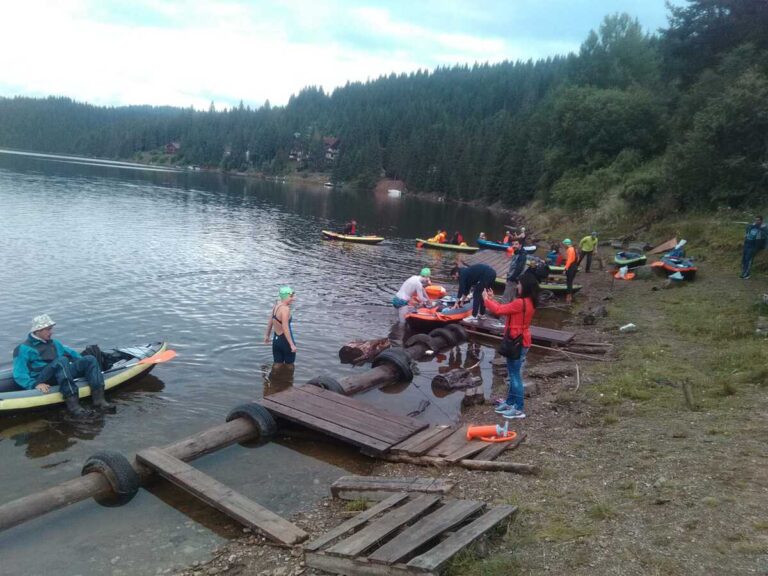 At the start we were 2 athletes who tried to cross swimming without neoprene, but unfortunately the second one stopped before the end and I remember 5 other athletes who swam in neoprene; one of them being my future good friend, Mihai Badea. 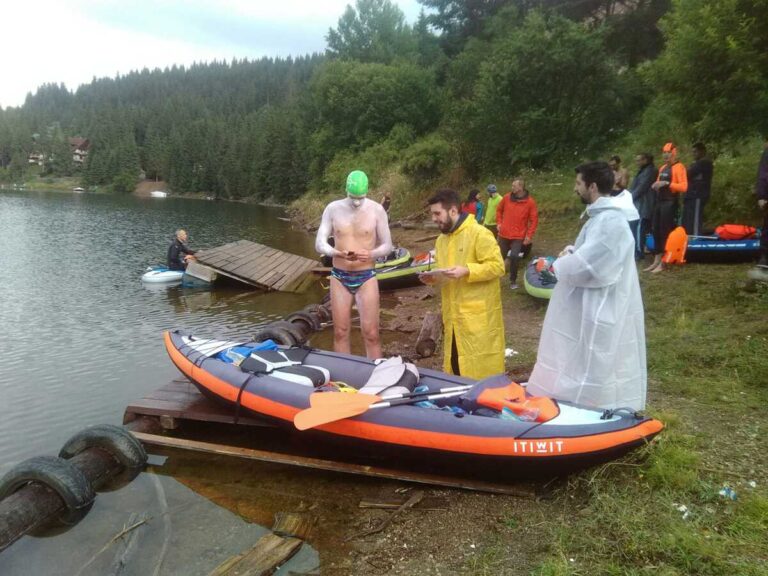 In this swim I had with me two wonderful people, of remarkable altruism, who supported me as and with everything they could, one was Marius Sutea with the role of assistant / support and another in the person of Alexandru Achim, with the role of observer. With both of us, I established a long time ago details regarding the role of each one in this swimming, about what the assistant or the observer should do or not do.
To memorize the route I used different GPS tracking devices, and to combat the sun, absent, I used a water-resistant cream based on zinc oxide; a classic solution for long distance open water swimmers.
I started around 9 o'clock, with a shore temperature of 19 degrees and a water without waves. In general, the swimming took place without remarkable problems, but the support / observation team was tested by wind, rain and low air temperature, I often have the impression that the kayak pair goes through a much more laudable endurance effort than the one on which we are trying to achieve. 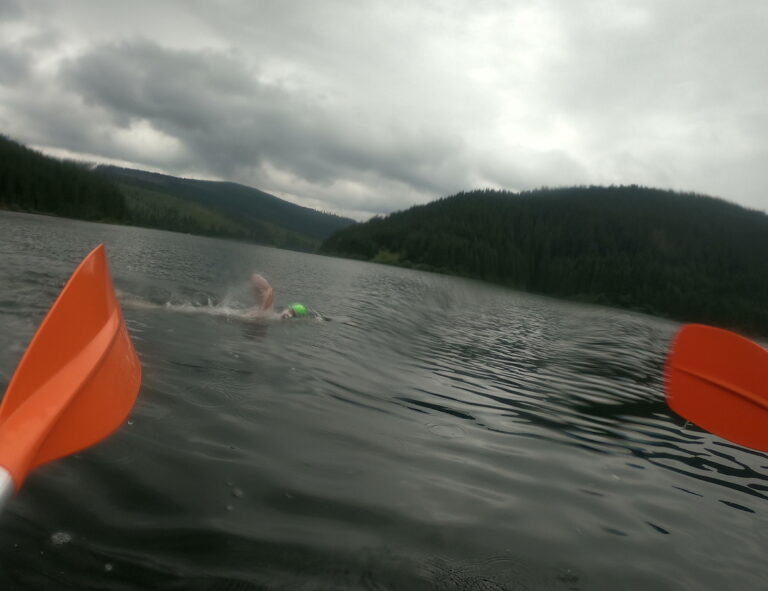 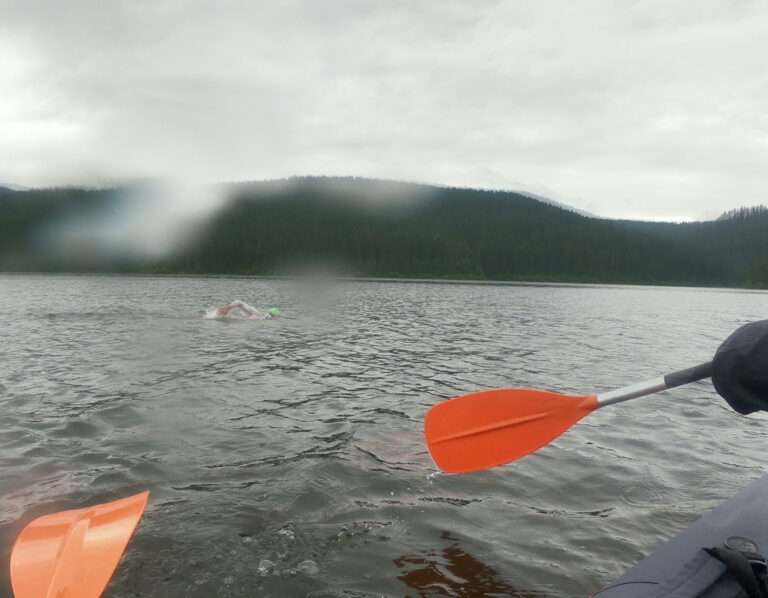 During the swim, in the shower, I tried to monitor my state of presence and be the first to determine if I have a problem or not, and because the fact that the kayak was inflatable and the wind sometimes blew hard, the assistance team he was 50-80 meters behind, without always being able to notice my facial expression, mental presence or general behavior, you see a possible trembling sign of the beginning of hypothermia. (I do not recommend this solution in extreme conditions / large swims because I believe that if you end up struggling with your own limits, it would be healthy - if not vital; that the one who objectively monitors health should be a member of the team assistance and not the swimmer). It was also the first time I found that the product "inflatable kayak" is not suitable for long distance swimming in open water.

Near the "tail of the lake" I encountered a problem: I realized that it is not clear to anyone, not even to swimmers - not to the assistance teams around me (mine / Mihai's) which is the end of the 14 kilometers and so I repeatedly stopped to look for a landmark, fixed and resistant in time (condition for documented swimming, according to MSF rules), which contributed to lower body temperature. 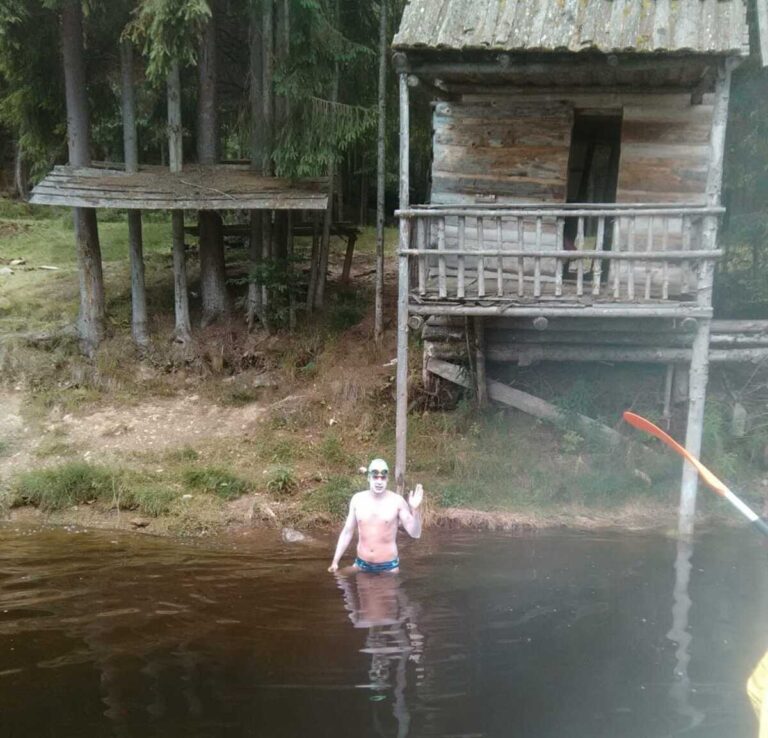 In the end I found an old house, beautiful, as if abandoned, "there" since the beginning of the accumulation lake and I decided that it will be the end point of the first round.

I found "The End of the Lake." 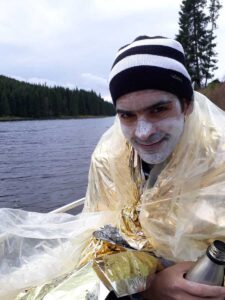 Also according to the rules of marathon swimming, at the end of the first lap, I had to get out of the water completely, to photograph the exit and to note, through the observer, the GPS coordinates.
This break with getting out of the water, with 13 degrees outside temperature, put a lid on me, and when I re-entered the water I started to shake uncontrollably, a state in which I swam 1-2 kilometers "downstream".
I made the first swimming crossing, unassisted according to the rules of the Marathon Swimmers Federation and I obtained the first Romanian documentary in this sport.

I have a regret, however, that I failed to cross the lake - back and forth, considering that the return to the dam would have been a much smaller effort, if not accumulated - because I would have been assisted by the flow of the Somes, instead to swim as I swam in the shower against the current / flow of water.

In the end, after parking on the shore, we were taken by boat by the organizer to an exit point, on the surface of the lake where we were greeted with a warm, delicious soup.

More details about swimming in Lake Belis can be found in the swimming documentation report available on site-ul MSF.